The Neenah-Nodaway Yacht Club has no physical clubhouse, but instead manages a very valuable waterfront asset on the south channel of the Fox River in Neenah: more than 100 moorings for the use of its members and the Fox Valley Sailing School. In keeping with our long-standing mission, these moorings are among the most affordable options for in-water sailboat storage in all of Northeast Wisconsin.

Fifteen of the moorings are located near the Theda Clark Medical Center with the remainder adjacent to Riverside Park on E. Wisconsin Avenue. The harbor is reached by entering the river to the north of the Neenah lighthouse following the navigation buoys provided by the Army Corps of Engineers and the City of Neenah. The channel is deep enough to accommodate most small to mid-size keelboats.

NNYC has club-owned dinghies available at both sites to allow members 24-hour access to their boats. Members who own their own dinghies can rent storage space in the NNYC dinghy rack.

Moorings are assigned on a first-come, first-served basis each spring and then, as available, for the remainder of the summer. Members cannot own specific moorings and moorings are rented on an annual basis.

Due to the limitations of the harbor and our mooring gear, moorings are generally limited to boats 30’ LOA or less and/or maximum displacement of 10,000 lbs. The harbormaster may make exceptions on a case-by-case basis. 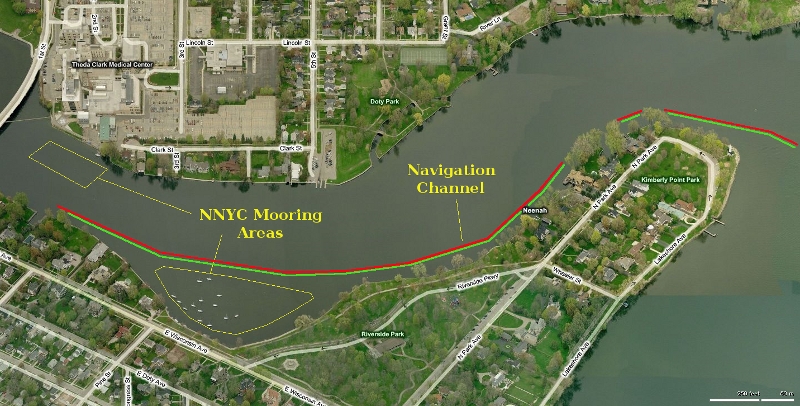